An Innovative Look at Muscle Mechanics by a Mechanical Engineer 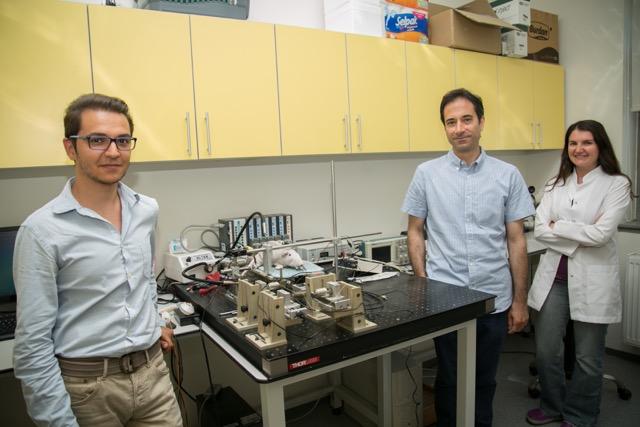 An innovative approach to Botox treatment from a Boğaziçi University faculty member....

Prof. Can A. Yücesoy of Boğaziçi University’s Institute of Biomedical Engineering has been working on a project aimed at developing a new approach to understanding the causes of muscular diseases and optimizing currently used treatments, using mathematical modeling and various experimental techniques. The project is supported by TUBITAK.

Prof. Yücesoy received his undergraduate degree in Mechanical Engineering from Boğaziçi University in 2008.  He was the recipient of the Outstanding Young Scientist Award of the Turkish Academy of Sciences in 2008 and the Outstanding Achievement in Research Award from the Boğaziçi University Foundation in 2009.  Yücesoy and his team have developed a special muscle mechanics measurement technique to be used during the orthopedic surgery of cerebral palsy patients. The team’s work in the field has been cited in international academic publications.

Within the context of their work on muscle mechanics, Prof. Yücesoy has been doing research on optimal solutions to Botox injection treatments applied to cerebral palsy patients.

Yücesoy explained that muscles are the organs that provide motion and generate force, adding that he had been studying for a long time how muscles produced this force.  He argued that contrary to common knowledge, their studies have shown the mechanism to be much more complex than it was thought to be.  “The fundamental reason for this,” he explained, “is that the functions of the sarcomeres that make up muscles are affected by many more factors than believed, and the widely accepted opinion in the world of science has resulted in those factors being ignored, preventing a thorough understanding of the causes of many muscle diseases.”

“The word ‘sarcomere’ means small muscle in Greek; it is the fundamental functional unit of the muscle, and the length of sarcomeres is the primary determinant of muscle force.  Tendons transmit this force to the joints, enabling us to move.  However, we suggest that muscle fibers composed of sarcomere series and the connective tissue surrounding them are connected to each other not only in the tendons but also along muscle fibers. This makes the mechanism very complex, and causes different sarcomeres in the muscle to be different in length, contrary to widespread opinion. By means of experiments, modeling, and advanced magnetic resonance imaging techniques, we are able to show that muscles located side by side interact with each other and affect the length of the sarcomeres.  This indicates that the muscle’s fundamental function of generating force and motion is neither unique to the muscle nor is it unchangeable.  On the contrary, changes in conditions can change that function, too.  By conditions I mean the effects of illnesses and treatments, for example.  We are trying to continue our studies to further develop these scientific issues.”  This new approach described by Yücesoy has widespread applications in understanding the muscle functions of healthy individuals, increasing the performance of athletes, and decreasing disabilities.

Yücesoy told us that in recent years he and his team had been focusing on two areas of application related to this mechanism. The first of these is cerebral palsy patients and the mechanical behavior of their spastic muscles. Yücesoy went on, “These patients have difficulty in flexing their joints and for that reason they cannot walk and/or use their hands properly.  It is well known that this is caused by the very forces affecting the joint mechanics; what is not known, however, is whether individual muscles are the underlying cause. Prof. Yener Temelli of the Istanbul University School of Medicine and myself have been jointly conducting a special experiment during the surgeries of cerebral palsy patients. By electrically stimulating the surgically exposed muscles, we measure their contribution to the motion of the joint directly from the tendons.  We are also excited about a recent finding: we were able to show that the spastic muscle does not have the potential to generate the force that can cause the highly visible problem in the joint.  We announced this finding in a paper we presented at the International Society of Biomechanics Congress; the paper was selected as one of the best five among over a thousand papers.  In subsequent studies, we showed that this situation could change when different muscles were simultaneously stimulated, whereas some other muscles were not affected at all.  Therefore, we think that individual muscles that are normal can be the cause of the joint problems of cerebral palsy patients when these muscles are abnormally integrated with each other.”

Yücesoy continued:  “Our most recent findings indicate the existence of great forces that reach the joints and create the problem but cannot be measured on the tendon of the muscle.  This seems to comply with our belief that the tendon is not the only means of transmission of force to the muscle.  Yet treatments focus on the tendon.  We think this means that the search for a solution has not looked at the core of the problem.  A connective tissue structure that connects muscles abnormally and adapts differently than in healthy people may be the crux of the pathology of cerebral palsy patients.  Accordingly, the forces that cause the problem in the joint mechanism pass through a muscle, but leave before reaching its tendon, and reach the joint by means of the connective tissue. If we can understand that, it will be possible to increase the functionality of surgical intervention to a significant degree and prevent the frequent post-surgery problems.”

Another point Yücesoy and his team focus on is Botox injections for cerebral palsy patients.  Pointing to the frequent use of Botox in many fields, particularly for cosmetic reasons, Yücesoy said, “Botox partially paralyzes the muscle and prevents nerves from stimulating the muscle.  Botox injections have a special place in the treatment of cerebral palsy.  The partial paralysis of the muscle eliminates a significant part of the receptors that comprise the reflex causing the problem in the joint.  This is referred to as “spasticity control” and it enables the patient to move more comfortably.  However, even though the impact is neurologically positive, it is the muscles that create motion and our studies indicate that muscles undergo a change following Botox injections.  We have observed children with cerebral palsy who have difficulty moving their joints after surgery. That points to a problem that needs to be investigated.”

Yücesoy added the following with regard to Botox applications dealt with in their study:

The neurological impact of Botox is positive, but it is not sufficient as a treatment

“Botox treatment is beneficial in terms of the neurological problems of cerebral palsy patients.  However, our studies indicate that Botox treatment has some effects that are not compatible with our expectations regarding muscle structure and function.  In general, Botox injections are applied periodically for two years and then discontinued.  Naturally, their positive impact on the neurologic problem disappears after injections stop. Our findings indicate that the muscle that is the motor of motion will change at the end of this period.  A modeling study we have developed where we simulate the Botox treatment process suggests that the pathological functions observed in the joints of cerebral palsy patients will not regress; they may even become more pronounced.  This finding is supported by the fact that at the end of this process most patients undergo surgery. Our findings suggest that the muscle tissue has adapted in a previously unknown manner.”

Yücesoy stated that their objective was to advance their work and determine the negative adaptations and ultimately find ways to eliminate them.  “In the context of this new approach, we believe that this adaptation is not caused by the medication itself but by changes in the mechanics caused by partial paralysis.”

Yücesoy and his team are planning a new study which will compare two patients scheduled for surgery – one of whom has never had Botox treatment whereas the second has.  Yücesoy participated in the 21st International Electrophysiology and Kinesiology Congress in Chicago on July 5-8, 2016, where specialists in this field from all over the world got together.  At the congress, Yücesoy had the opportunity to present the studies they have been conducting to the international world of science.